The bespeckled older gentleman posing with a cane in the photograph above was chosen at random. I liked his white hat, so I approached him “excuse me sir, I’m a local photographer out for a walk” and I showed him the reference shot of the scene on my camera screen saying that “I’d like to put a person in this picture.” As I pointed off to the Riverside Market parking lot, I noticed that four large men were trying to jimmy the lock on his van.

He glanced at his gleaming gold watch, and then at the van.

“The police are coming to unlock it, but we will have it open before they arrive,” he explained between inscrutible sentences of blended Spanish and Italian. Behind him, one of the men yanked a slimjim up the window seam without luck and cursed.

The old man checked his watch again, flashing the sun in his diamond pinky ring. Then he looked back at the men. They were still trying. After a pause he declared “I will be in your picture.”

We started crossing the street when the guy in charge of the crew became concerned and followed us asking where I was taking him. The old man ignored him and continued on, so I stopped and explained my little project. The guy nodded and waved me off. “There,” I said, catching up to the old man, “now they won’t worry about you.”

With that we crossed the parking lot in silence, splitting up halfway across. He turned toward the dried blue paint spill and I toward the marker I’d left. In the viewfinder, I immediately noticed his long shadow leading up the drainpipe to the big eye. I took one picture and accompanied him back to his van.

As we arrived, the men succeeded on the lock. They cheered and started climbing in, obviously eager to leave before the police got there. But the old man had wandered off again, slowly toward a gas stand at the sight of a classic mint Jaguar. The crew waited uncomplaining as he stood staring at it, rubbing his hands as if he might buy it right there at the pump. I thanked him respectfully and left without asking his name. 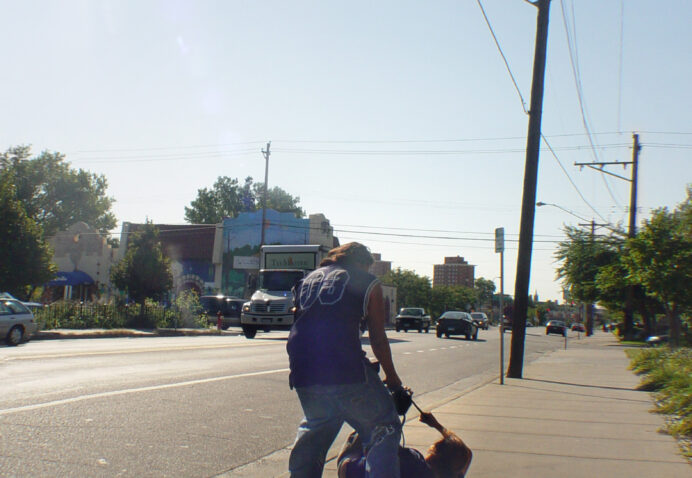 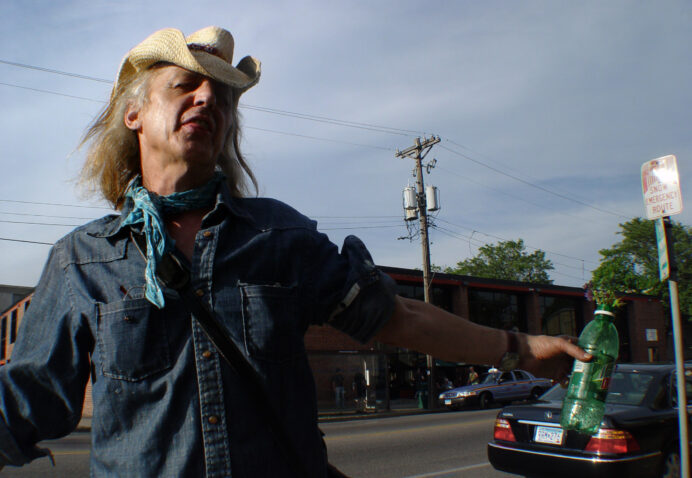